The end of the Fall Semester at Morrison Tech is about much more than final exams. Students and Staff members have been busy lately with a variety of activities. Even with the semester coming to a close soon, there is still plenty more to do. 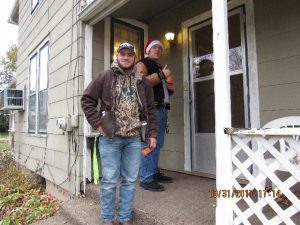 On October 31st we hosted the American Red Cross for our annual on campus blood drive. Yes, a blood drive on Halloween! There is always a good turnout for this event, drawing in students, staff and local community members. Also on Halloween, as community families bundled up their ghosts, ghouls and goblins for a night of fun and festivities, the students of Morrison Tech set out on their own Halloween trick-or-treating quest. Instead of looking for candy, sweet treats, and even the occasional box of raisins, the students set out looking for something much bigger than themselves.  They were out asking for donations for the well known Child Hunger organization, UNICEF. After spending multiple hours across town speaking to local families around the community, the group went back to their campus with a pot full of spare change and extra dollar bills. In all, the spur-of-the moment idea turned into a hugely positive experience, raising over three hundred dollars in just one evening for the charity. Just another example of how a SMALL SCHOOL can still create BIG OUTCOMES. 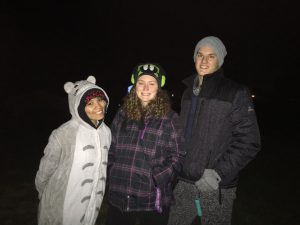 For the past couple of years our students have participated in National Hunger and Homeless Awareness Week by camping outside one night in the cold November air. The students chose to camp outside in cardboard boxes, tents, tarps and even rolled up in blankets by the fire. This year they not only camped out in the cold, they also hosted a free pancake breakfast for the community. Donations of nonperishable food goods and gently used winter clothing were accepted and then donated to the local food pantry and homeless shelter.

Another activity the college has participated in during recent years is the Western Whiteside County Manufacturing Day. This event is driven by the Sauk Valley Manufacturers Organization and is an effort to expose High School students to careers in manufacturing. The Sauk Valley Manufacturers Organization is comprised of executives from around 50 companies in the area. The Manufacturing Day activities included a presentation from John Gvozdjak, of Franz Inc. Mr. Gvozdjak spoke about opportunities for employment in the manufacturing field and training that is needed to be successful. High School students from Fulton, Erie, Morrison and Prophetstown attended the presentation. After leaving the presentation they were taken on tours of several area manufacturing facilities including: Mallard Manufacturing, Wahl Clipper Corp., Custom Pack, Timken and Sterling Multi Products to name a few. 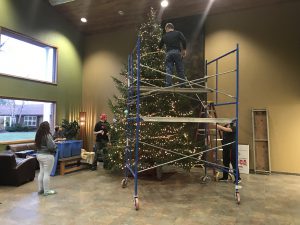 The decorating of the school Christmas tree has become a much anticipated annual campus tradition. Each year a large Christmas Tree is delivered in mid-November and displayed in the lobby of the Administration Building. The 18ft tree requires scaffolding to decorate with lights and ornaments.  Morrison Tech Student Government members brighten the tree for everyone to enjoy. The tree will be a mainstay in the building until Christmas. 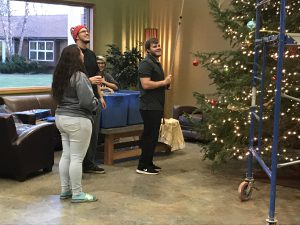 Along with the Christmas tree another yearly tradition on campus is the Student Government Tukey Day. This year they provided a catered lunch featuring traditional Thanksgiving dishes.  The entire students body and college staff members are all able to enjoy the meal.  The annual festive meal is held in the lobby of the Administration building - allowing all to take in the beauty of the tree.

This year a new event was added to the Turkey Day festivities.  The event turned out to be a big hit with students and staff.  With the huge turnout this year, hopefully it will become a yearly tradition. The first Morrison Tech Turkey Day Bags Tournament was held in the auditorium and featured teams of students and faculty members competing against each other. Trophies were designed and made in the Morrison Tech Prototype Lab.  They were awarded to the first and second place finishers. 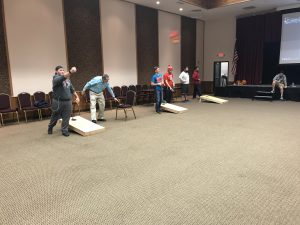 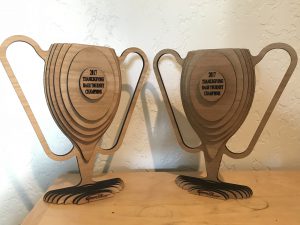 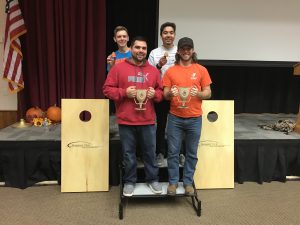 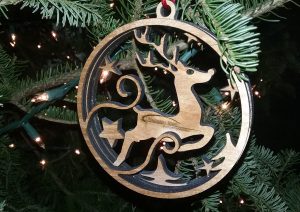 All of this comes together in the late fall despite the students preparing for FINAL EXAMS. When the students depart for Christmas Break there will still be much to do around the campus. What has become another yearly event for all, is the arrival of  Santa Claus  on campus.  Santa will visit us on December 20th, from 5pm - 7pm. This event is open to the community and is a chance for area children to tell Santa what is on their list for this year! A special treat for those visiting Santa will be a limited edition ornament created and produced by the college.

Before year end, many campus renovations and upgrades are in store.  Preparation is also on the forefront for our new Innovation Center . As you can see, the end of the Fall semester is always a very busy time on the Morrison Tech Campus. To keep track of what is going on at Morrison Tech, check out our calendar and follow us on Facebook.