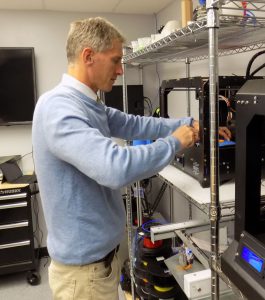 Students at Morrison Institute of Technology apply their skills in a variety of ways, and recent updates to the school are aimed at fostering creativity and innovation.

Administration President Chris Scott says that those changes included updating some of the classrooms. Starting in 2015 and continuing into the early summer of 2016, four classrooms were changed to include a table and chair style rather than traditional desk style. This arrangement can be configured differently based on the needs of the course.

The facility’s auditorium was recently extended. The stage now sits 20 feet past where the exterior walls of the room used to be. The expansion project began in June and was completed in August. The auditorium is used for academic events as well as conferences by businesses and industries. It is also rented out by a local church and accommodates performances by a theater group.

While numerous other changes have occurred at the Morrison Institute of Technology in the past year, much of the excitement on campus centers around the Prototyping Lab. The lab was installed in 2013 but changes continue to be made frequently. Recent updates include the addition of four 3-D printers and a CNC router. This equipment helps students bring concepts from Computer-Aided Design (CAD) software into reality. The 3-D printing process is intended to shrink the time from design process to the end of production. Less time in the design process stage means products reach the marketplace more quickly.

The Prototype Lab features several 3-D printing projects, some complete and others still in-progress, done by students. Over time, four versions of a “spider-bot” have been created. The latest version is not only a different color than its black-and-white predecessor, but it also features improved gears and connectors. The legs also have a more visual appearance. Scott says the “spider-bot” may receive further refining as it continues to be used as a teaching tool and example of what can be done with 3-D printing.

The lab also features some equipment for working with robotics. Scott says the institute cannot currently afford to bring in a full robotics program, but the campus does have the equipment to create some fully functional robotics. Students can program and work with them.

Some other projects completed in the lab include a functioning two-stroke engine made of 28 parts.

Students have also applied their knowledge to projects other than prototypes. Several projects resulted in permanent fixtures and facilities that the Morrison Institute of Technology can use for years to come. In the spring and summer of 2016, students planned out a volleyball court that was recently installed. Most of the work done on campus is done by the staff or students.

The front of the building where most of the general education courses are taught recently received the installation of two Japanese lanterns. These were also projects that students handled from conceptualization through completion. According to Scott, each of the lamps weighs about 400 pounds and is made of six or seven parts.

While many of these changes have been physical or structural, Scott says the biggest change to occur in the past year is related to the institute’s curriculum, which now features dual enrollment with several local schools in Illinois. At the moment, this dual enrollment opportunity allows high school students to complete two college level courses by the time they graduate from high school.

Scott hopes that this program will be extended to two years, or four classes, in the near future. He says discussions for that change are ongoing.

Above all, Scott and the administration hope these changes help word get out to people about what the institute has to offer.

“A lot of people don’t know what we are and what we do,” Scott said.

The school is private and non-profit and tries to keep costs low. He also says the job placement rate for Morrison Institute of Technology is very high at around 95 percent.

“Students have to work at not getting a job after graduating from here,” Scott said. He added that the average starting salary for Associates Degree recipients from the institute is $47,000.