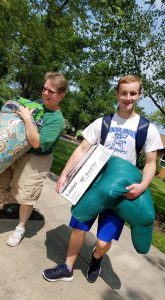 Despite the heat, Move-In Day for Morrison Tech students was full of laughter, anxiety and a few tears from parents.  The incoming and returning students were greeted by Student Ambassadors, the Admissions Department and the College Registrar.  Everyone pitched in to move belongings into the once empty dorm rooms!

The energy around the event was undeniable!  At midday cars, trailers and even a motorhome pulled in to unload and settle their students in for the upcoming year.  Jasmine, a returning student and RA, directed the students to their rooms and proudly let them know the rooms had been remodeled from the past year while Sean, another RA, handed out keys and welcomed the new students’ “It was great to watch the realization dawn on their faces that this is it - they are in college!”

The class of 2021 is a diverse group.  Despite having come from different backgrounds and areas they do have more in common then they realize. They are all dealing with all of the anxious excitement that comes with big adult decisions, and they will soon share a common history.  Their time together may be limited to a few brief years, but the impacts of that time together will be far-reaching and last a lifetime. 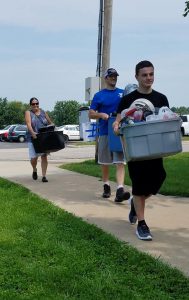 Together the Morrison Tech class of 2020 has visited all states except Hawaii and Alaska.  Thirty three percent of them have traveled overseas. Twenty five percent are first generation college students while three of them are following in a relatives footsteps by attending Morrison Tech.  There are 2 Eagle Scouts, 3 Blackbelts, 1 twin, 2 are fluent in another language and one was born on Leap Day. The group is definitely dog lovers while a few branched out with their pets; a bearded dragon and a few tortoises.  The majority have in common supporting the Chicago Bears, Cubs and White Sox while we have one lone St Louis Cardinal fan!

After parents, friends and family dispersed for the day the Class of 2020 was left to set up their rooms, meet their peers and inventory food for the week.  The college houses apartment style dorms where the students will need to learn to cook for themselves. 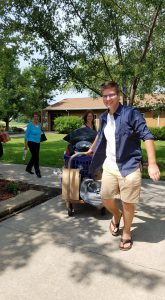 For many parents this was their first time moving a student into college.  Many pictures were taken in front of the college’s signs around campus. A few parents were hesitant to leave; they handed out last minute advice  - one mother was even so clever as to place a pillow on her son’s bed that said ‘Call your mom.”