The popularity of 3D printing (also known as additive manufacturing) has increased tremendously over the past three to five years, however the process goes back farther than most people know. 3D printing was developed in the 1980’s and is a process used to make three-dimensional solid objects that are creating parts one layer of material formed using computer numerical control (CNC). After one layer is created, another layer is printed on top of it and the layers are fused together. This process is repeated until the entire part has been printed. 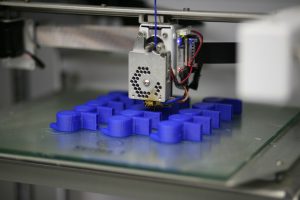 The use of 3D printing has advanced many areas of manufacturing; fashion, architecture, aerospace and even the candy industry are just a few examples. From 3D printing food, to living tissues there seems to be limitless possibilities for this technology. Here are a few creative ways that 3D printers are being utilized:

Healthcare - 3D printing has been used to make medical equipment along with prosthetics. 3D printing prosthetics offers a much lower cost to the patient than the traditional methods.

Automotive - Currently 3D printing is being developed to radically transform the way vehicles are manufactured. An electric car developed by Local Motors, known as Strati, was the world’s first 3D printed vehicle. One Srati was printed in 44 hours during an International manufacturing technology show held in Chicago. The advances made by Local Motors has spurred other automotive companies into using 3D printing technologies. Another company named Divergent 3D has developed its Blade supercar and Dagger motorcycle in an effort to showcase their additive manufacturing technologies in hopes of changing how vehicles are built.

Education - The introduction of STEM curriculum (science, technology, engineering and math) in classrooms has been given a huge boost with the addition of 3D printers. Students enrolled in a variety of subjects are able to print out prototypes by using creativity and problem solving. Inventive teachers are constantly finding new ways to incorporate 3D printing in their classrooms.

Every industry, in at least some capacity, has now been permeated with 3D printing.  Many companies have been using 3D printing for a long time but now the technology has advanced to the point where it is becoming a viable manufacturing process, capable of producing production quality parts. The automotive and aerospace industries carry the highest potential for the implementation of additive manufacturing. It is forecasted that nearly half (49%) of automotive companies will use 3D printing to directly manufacture car parts. This process will allow them to address the challenges such as a demand for increased customization, continued improvement, and lightweight components, not to mention an ability to address quality problems much quicker than is currently possible.

Students at Morrison Tech are utilize 3D printing in many different ways. Some classes use printed parts to better demonstrate a topic being presented. In others, students are creating their own designs and using printed parts to create working models. There is also a Maker Club where students can make pretty much anything they want using 3D printing or any of the other technology we have available. We currently have printers that feature the FDM technology from Type A Machines and BCN 3D, SLA technology from Form Labs and have plans to add more technologies in the future.

It has been reported that with the high demand of 3D printer’s, shipments increased by 108% globally between 2015 and 2016. This resulted in 456,000 units shipped. It is expected that by 2020 this number will be at 6.7 million units. With constant advancements in technology and new products at every price point it’s easy to say that 3D printing is here to stay.